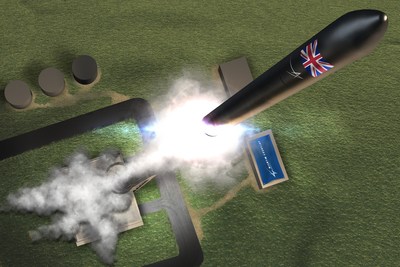 "The countdown to the first orbital rocket launch from UK soil has officially begun," said Patrick Wood, Lockheed Martin's UK Country Executive for Space. "The UK Government has stated its desire to grow the UK's space sector to ten percent of the global space economy by 2030. We are proud to be selected to help them achieve this goal. This initiative will not only spark advancements in science and innovation, it will create new opportunities for current and future UK-based suppliers to become part of the next space age."

[Note to Editors: Download or embed video from this link.]

With a recent grant from the UK Space Agency, Lockheed Martin is leading a team to execute several strategic projects to support the UK Spaceflight Programme, with a goal of providing the first vertical space launch in the early 2020s.

"This historic 'pathfinder' launch for the UK will also demonstrate the tremendous potential small satellites and CubeSats have across a wide range of commercial and government data collection applications," said Wood. "We believe, as the UK Space Agency does, that this effort will help bring the UK to the forefront of the rapidly-growing, global small satellite market and support the UK's maturing space supply chain."

Lockheed Martin brings significant space experience to the UK's Spaceflight Programme, from ground systems, to launch vehicles, to on-orbit missions. The company's LM 50 CubeSat platform is an innovative and powerful platform that can be customized to a wide array of missions and payloads. It's one of four modernized satellite platforms Lockheed Martin offers its customers, including the LM 400 small satellite, LM 1000 remote sensing bus, and the flagship LM 2100 geostationary bus.

About Lockheed Martin
Headquartered in Bethesda, Maryland, Lockheed Martin is a global security and aerospace company that employs approximately 100,000 people worldwide and is principally engaged in the research, design, development, manufacture, integration and sustainment of advanced technology systems, products and services. This year the company received three Edison Awards for ground-breaking innovations in autonomy, satellite technology and directed energy.